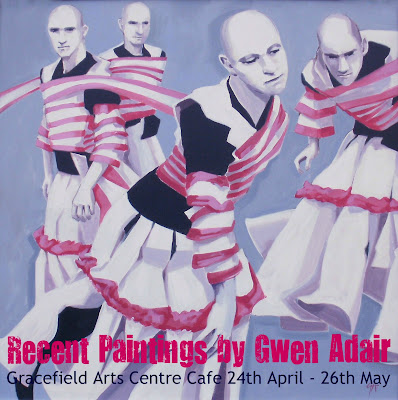 "My current work explores the roles of men in our society, where many stereotypes and contradictions exist. A man with tattoos, for example, is perceived as “macho”, whereas a man who decorates his face with make-up is seen as effeminate. Clowns are visually interesting, and blur the boundaries of acceptable maleness, becoming androgynous. Wrestlers parade their machismo through staged violence wearing costumes which are undeniably camp, while the “blood” running down their faces creates grotesque masks.

The composition of several figures in one painting creates challenges around how to balance positive and negative shapes and the spaces between them. Still life painting makes similar demands, and is another enjoyable genre, but I keep returning to faces. I deliberately paint from photographs, because I am fascinated by the idea that we think we can tell who a person is from 1/250th of a second of their life. The subtleties of facial expressions give us clues, and we invent whole narratives for these characters.

I trained at the Glasgow School of Art from 1984-89, in Graphics and Illustration. I have since worked as a community artist and an art teacher, and have taught Art and Design at Dumfries Academy since 1993.
In 2006 I was a finalist in the ING Discerning Eye Drawing Competition in London, and have also exhibited in the Paisley Institute Drawing Competition, the SAAC (now the VAS), and locally at the Gracefield Arts Centre, the McGill Duncan Gallery and the Catstrand."

Posted by MMac
Posted by The Commonty at 12:48 PM