I'd like to invite you to 'Friends of Alchemy Film and Moving Image
Festival', a special event at 6pm, Thurs 28 June, held at Tower Mill,
Heart of Hawick. This is our first ever ‘Friends of Alchemy’
event, an exciting evening of film discussion, meeting and friendship.
In advance of this year’s Alchemy Film and Moving Image Festival
(Oct 26 - 28th), our Friends evening is a great opportunity to meet
others and get involved in a lively debate around the themes of the
festival.
We’ve had well over 300 film submissions this year on our 2012 theme
of ‘traversing the wild,’ over two thirds of which are
international. We’ll be introducing some of the programme highlights
planned for this year’s festival, while discussing the increasingly
international context within which the festival operates. 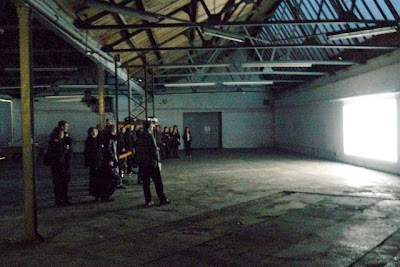 Our special panel discussion will focus on the identity of Scottish
film and its relation to landscape. Is Scotland evolving a unique
voice in film in the 21st century? How does that ‘voice’ relate to
the natural landscape we are all a part of?

We’re hoping for a stimulating debate – bring your own thoughts
and ideas – we welcome your participation!
Refreshments will be available and there will be time to mingle and
meet others.
Free event, but please RSVP using the facebook events page or direct
to bridie@bordersartstrust.org by Mon 25 June.
Alchemy Film and Moving Image Festival:
http://www.alchemyfilmfestival.org.uk/
Facebook event page (please share it):
http://www.facebook.com/events/375970405796452/
Tower Mill, Heart of Hawick, Map and directions:
http://www.heartofhawick.co.uk/hohmaps/default.asp
Posted by The Commonty at 6:31 PM