A group of artists from Dumfries and Galloway have unveiled a new piece of public art for Birmingham.
The team of four – Robbie Coleman, Vik Litton, Emma Butler, and Jo Hodges - have spent the past months fashioning a life-size fibreglass rhinoceros that will sit at a major crossroads in Birmingham’s gay village. The project, which will see the rhino adorned with mirrors and acrylic ‘gemstones’ to create the effect of jewellery, is part of the city’s plans to drive tourism.
The Rhino was  transported to the Midlands last week where it was installed on top of the Wynner Building. While the rest of the team have been constructing the rhino’s body, Jo Hodges has constructed a ‘heart’ that  lives inside the finished sculpture and contains photos, stories and memories from Birmingham’s LGBT communities.
Robbie said: “When we heard about the project, we though it would be interesting to create an object that was both beautiful and brutal at the same time. Powerful and fragile.
“We settled on a ‘jewelled rhino’, as the rhino is a historic symbol of the gay rights movement in America, and Birmingham has a rich jewellery-making history. Plus, with the heart created by Jo, local people will be able to look up at the rhino in years to come and know that a tiny part of them lives within it.”
The project is the result of a collaboration between Birmingham City Council, Birmingham LGBT, GB Training Ltd and Southside Business Improvement District - which incorporates Birmingham’s gay village, Chinatown and theatre districts. Julia Chance, manager of the BID area, believes the project will benefit the district:
“The rhino project is a great example of private, public and charitable organisations all collaborating to create something positive for the community, and will become a new local landmark that celebrates the area’s diversity and importance.” 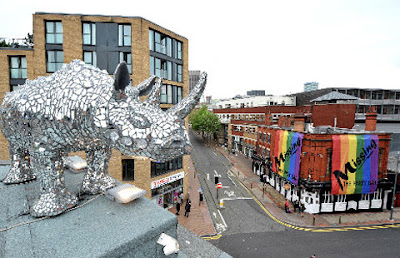 Posted by MMac
Posted by The Commonty at 4:57 PM