Red Rose, White Rose - not to be missed

Red Rose, White Rose - the women's tale, interwoven with 16th century music
The story - the wife and sometime mistress of James IV share the experience of loving a powerful man - Margaret's currency is her fertility, Janet's her undemanding demeanour - both stand to lose much as men all over Scotland go to battle on the bare moor of Flodden with their king. In the meantime the women are comforted by music that expresses their fleeting joys and sorrows.

The background - this performance marks a new collaborative performance between early musicians, writer and readers resident in Dumfries & Galloway. From a text based on a story in her book of short stories -White Poppies (Pewter Rose Press 2012) - Vivien Jones has created a dramatic reading of an imagined exchange between two striking renaissance women on the night before the battle of Flodden in 1513. Published writers in their own right, Mary Smith and JoAnne McKay, join musicians, Richard and Vivien Jones, playing 16th century music, to tell the women's tale. 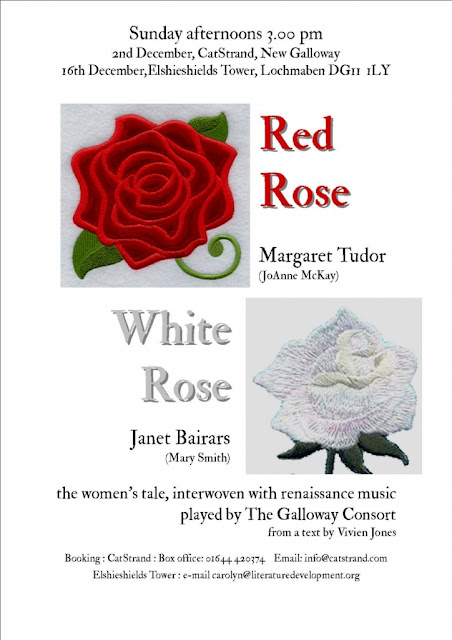