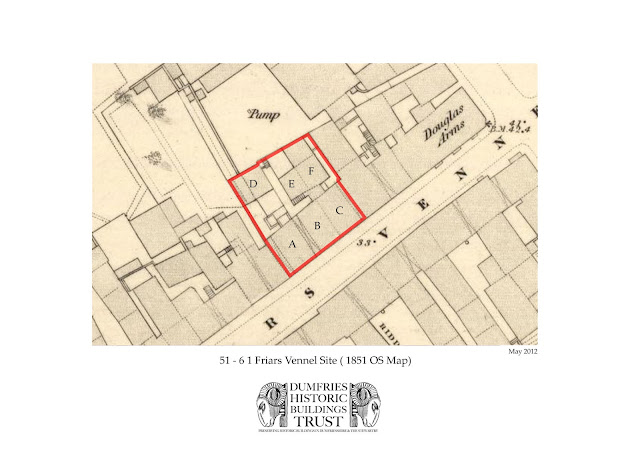 URGENT:
DUMFRIES & GALLOWAY COUNCIL VOTES TO DESTROY ANCIENT BUILDINGS
ON FAMOUS MEDIEVAL STREET IN DUMFRIES
On Wednesday 28 November, Dumfries Council approved the demolition of five historic buildings, at least two of which date from the 17th/18th centuries, in Friars Vennel, Dumfries. Friars Vennel is a famous Medieval shopping street leading down to Devorgilla's Bridge and stunning views of the River Nith, and sits in the heart of Dumfries's Medieval Town Conservation Area.

Historic Scotland has referred to some of these very buildings, of great charm and medieval appearance, as 'probably the oldest buildings on the street'.

Despite strenuous calls from unprecedented numbers of members of the public, from a conservation structural engineer, from the local Historic Buildings Trust, and from the Community Council, for renovation and conservation, Dumfries Council rejected all of them in favour of demolition and replacement with new buildings.

It seems unlikely, given Historic Scotland's recent record in Dumfries that HS will call this decision in. In 2011 HS did not act to prevent the demolition of a large portion of 19th century St Mary's Street, Dumfries, despite a 500 strong petition to the Minster, Fiona Hyslop; nor, in 2010 did HS investigate the demolition of the frontage of the Category A listed Globe Inn and its rebuilding in an unsympathetic manner that was not like for like. (The Globe is arguably Scotland's most famous tavern, where Robert Burns stayed, and etched the glass in the windows using his diamond ring as a sylus – many of the old windows have recently been removed and replaced by the owner, using crude modern details.)

However, Dumfries Historic Buildings Trust, the Community Council, and other organisations have written to Historic Scotland requesting that they call in this decision, and overturn it. This would be the right thing to do. Should HS not act to call in the decision and overturn demolition, as the community in Dumfries hopes, the several organisations and individuals in Dumfries and beyond intend to support an application for a Judicial Review on this decision. It is hoped that, pending the outcome of this, an interdict can be sought from the Sheriff in the meantime to prevent the demolition of the buildings, as this action would be irreversible. The Community Council believes the decision made 28 December is challengeable in law.
NOTES:
HISTORIC IMPORTANCE
On 28 November the Planning Applications Committee heard from specialists, enthusiasts and professionals, that the buildings are of a great deal more importance than the "modest" significance, as stated by DGHP's Agents, that at least two of them were constructed before 1723 as evidenced by the chimney details, which show that the buildings were thatched. Also, the Georgian interior details at first floor level (fireplaces, six-panelled doors and some window shutters), show that these are not "typical of 19th and 20th century buildings" as asserted by an Agent of DGHP.

FEASIBILITY OF REPAIR
Structural engineer Dominic Echlin, of David Narro Associates, told the Members of the Committee that the buildings are not structurally unstable (as suggested by DGHP); that their conservative repair is likely to be feasable; that DGHP has not demonstrated that repair is economically unviable, since their costs presented for "repair" (their 'option 1') include the same costs for demolition, foundations, and propping of neighbouring buildings as their costs for the comprehensive re-development of the site (their 'option 3'). Their repair costs also include for the rebuilding of a large proportion of the buildings on site - which is entirely unnecessary and inappropriate.
For further information please email