England and the regional issue

D&G's very fine friend Peter Stark was one of three major cultural figures who dropped a wee bomb in the laps of Arts Council England with their report 'Rebalancing Our Cultural Capital'.....which basically stated that London was draining the public cultural purse at the expense of everywhere else in England.

Needless to say this has caused a wee bit of a Stooshie down souf and the question now is whether the arts folk in the regions are going to grow a collective backbone and demand better......will there be an ACE Stooshie to rival oor own of last year......will the larger debate about the future importance of 'peripheries' in relation to 'centres' be advanced a bit?

The editor of Arts Professional picked up the baton last night with her excellent blog post 'Tipping the Balance' - which we reproduce in full below:

Sometimes an elephant has been in the room for so long that everyone starts to think it’s normal for it to be there.  And having got used to living with it, we somehow stop noticing that life could be a whole lot better without it. The people whose job it is to get rid of it can then heave a sigh of relief as it’s not at the top of their list of priorities, and getting rid of it is bound to be a messy and unpleasant process anyway. The last thing they want is for anyone to remind those in the room that the elephant is still there, and suggest that it’s time to start doing something about it.

Such is the position that the DCMS and Arts Council England now find themselves in following the publication of Rebalancing Our Cultural Capital: A contribution to the debate on national policy for the arts and culture in England. Or maybe that should read ‘An unwelcome contribution...’  as it has put the central funding bodies in a very tricky position. The publication of the damning report coincides, ironically, with the launch of ACE’s own updated Strategic Framework  – the one that tells us in no uncertain terms “we want as many people as possible to be stimulated by arts and culture wherever they are”. The picture this new report paints of funding distribution across England suggests that these are at best weasel words. With millions of people unable, due to cost and distance, to access the arts offering in the capital, it is now clear that taxpayers and Lottery players outside London are digging deep into their pockets to subsidise access for the relative few (including millions of overseas visitors, who also get a mention in the report). They may be paying the piper but they’re certainly not calling the tune. Given the rich vein of non-government funding that flows into the arts in London – not least through a buzzing and vibrant commercial arts scene and disproportionately high levels of sponsorship and philanthropic giving – one might expect national arts funding to be correspondingly weighted in favour of the regions, in an attempt to redress the balance. But for the past 50 years, the opposite seems to have been true. Money attracts money. 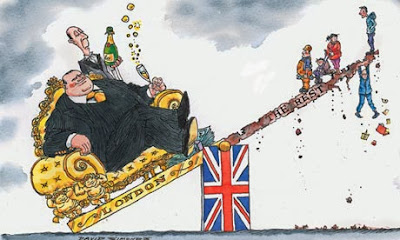 If ACE’s access goal really is driving its funding decisions, as the strategy framework suggests, then when it publishes its plans for 2015–18, no doubt we can expect a concerted effort to deliver the range of arts experiences that are commonplace in London to the far reaches of England. What would better access for the English regions look like in practice?  More touring must surely be part of the picture. But by its very definition, touring is temporary, and what England needs is an infrastructure that enables cultural production to be as fully embedded outside the capital as it is inside the capital. Anyone in any doubt as to why, should read Lyn Gardner’s article on her recent visit to Yorkshire. “Excavating stories, creating living history and working with the community. It's good to see local theatres being just that – local”, she said.

Scotland and Wales are already ahead of the game, insisting that their national theatres don’t have their own venues, but must reach out to their respective countries as a whole. It’s a model that “irrigates rather than drains” – the concept favoured by the authors of Rebalancing Our Cultural Capital, who, by presenting a coherent and convincing set of figures, have undoubtedly succeeded in their primary objective of stimulating debate on the subject.
Peter Bazalgette* has already admitted an imbalance and says “more needs to be done”, but despite what he said in his interview on the Radio 4 Today programme, ACE’s strategy framework document makes no reference to addressing regional access, and its statement released in response to the report says: “In the current climate, we believe it is best to strengthen capacity outside London rather than weakening investment in the capital.” How on earth this ‘strengthening’ can possibly take place in the absence of more cash is a mystery. But Bazalgette says “Judge us in two years…”. Don’t worry - we most certainly will.

*Peter Bazalgette is the CEO of Arts Council England

Keen eyed Scots will no doubt have clocked the phrase 'Scotland and Wales are ahead of the game..' - nothing we like better than favourable comparison to our English cousins.....BUT we should guard against smugness....only 2 years ago Creative Scotland published figures that showed that more than 70% of core funded arts organisations and venues were in the Central Belt and precisely 0% were south of Lanark.

There has been much progress made through initiatives like Place Partnerships and the Creative Place Awards.....but we need to keep up the pressure for excellence and participation nationwide and keep fighting our corner - just as the powerful forces in the Central Belt fight theirs.

Nice work by Peter Stark and a handy document to keep in our amoury - in case we need to commission a Scottish version.
Posted by The Commonty at 4:47 PM