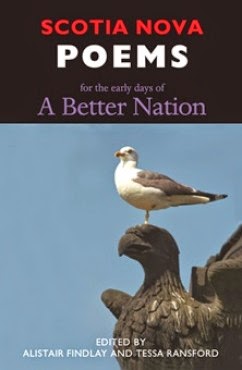 “Whatever the outcome of Scotland’s Independence Referendum on 18 September 2014, a better Scotland is possible. Across every aspect of life in Scotland – housing, inequality, life expectancy, health, education, crime, sectarianism, localism and more – we all know that a better Scotland is possible. And then there’s Trident. And the Bedroom Tax. And the Democratic Deficit. And on and on it goes. Scotia Nova is a collection of poetry addressing social and political issues in Scotland. It is an ambitious and inspiring attempt to raise public interest and awareness.”

The launch event will include readings from some of the contributors, as well as a discussion about the book & the ethos surrounding its creation.
Posted by The Commonty at 1:31 PM