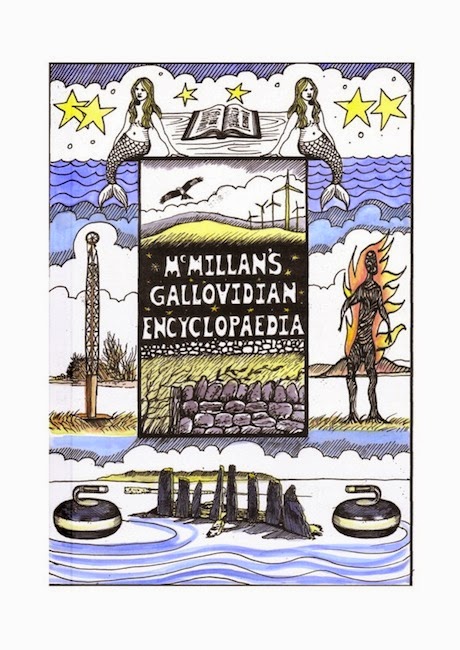 Wigtown Festival Company commissioned Penpont-based author, Hugh McMillan, to write about the people and places of the region after travelling the length and breadth of D&G gathering stories. It was inspired by the cult classic Scottish Gallovidian Encyclopaedia by John Mactaggart, published in the 19th century. The 1824 version proved to be so controversial it was withdrawn the following year.

The 2014 version should be less contentious and offers a witty and irreverent look at contemporary Dumfries & Galloway, a highly individual snapshot of this unique place which operated for so long as an entity completely separate from its neighbours Scotland and England, a land that was shrouded in myth and populated by warriors, emigrants, fairies and liars. Some say it still is….

Festival Director, Adrian Turpin, said of the new book, “We’re delighted with the final book written by Hugh and illustrated by Hugh Bryden from Dumfries. It brings together many of the stories, tall tales and anecdotes from this remarkable area. We’re lucky to be surrounded by so many authors and artists and it’s wonderful to have two of them collaborating on this commission for us.”
To buy the book online (£15 +P&P), click here: http://www.wigtownbookfestival.com/product/mcmillans-gallovidian-encyclopaedia/

You can read Hugh McMillan’s blog here: http://greatgallowaytalehunt.blogspot.co.uk/
Posted by The Commonty at 4:23 PM