From Natalie Vardey and Spring Fling 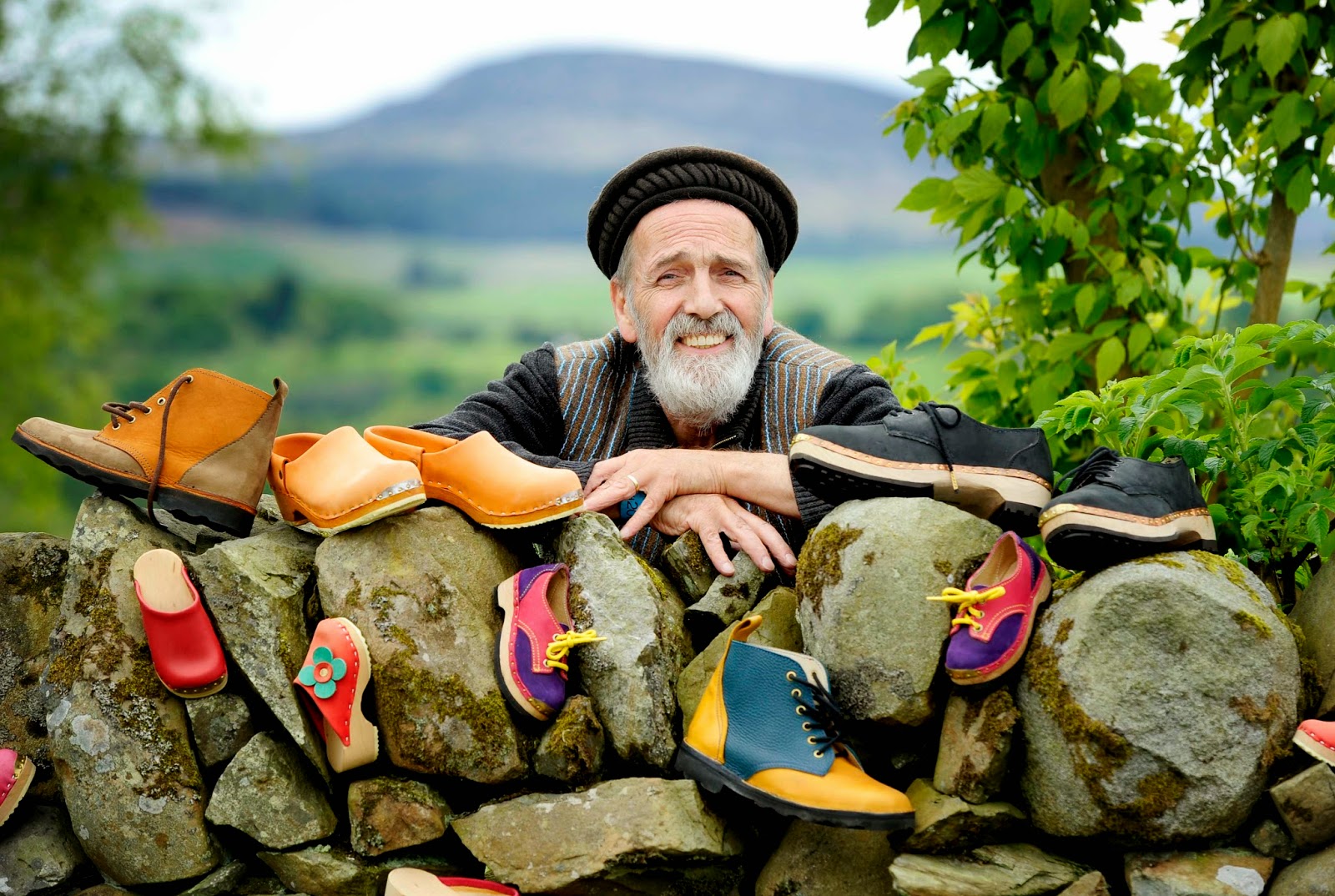 It is with great sadness that we have to report the death of Godfrey Smith, Scotland’s last Clog and Shoe maker, on 12th Jan 2015.

Godfrey has been involved in the craft movement in our region for decades, being in at the start of so many projects that eventually grew and grew. The Galloway Craft Guild and Craft Map in the early 1980s was testament to this, and, with the help of others, makers from across the region were brought together for the first time.

He can be credited for having a vision for the arts that many in the council were slow to share; this enthusiasm and persistence all those years ago led to lobbying councillors, never letting the dust settle and being the Go To person for advice on how to steer routes through bureaucracy, and how to keep on an even keel.

A craft market in Castle Douglas, stalls at village events and the early days of emerging festivals – Godfrey was there with his brightly coloured clogs and shoes, networking, sharing his knowledge on so many topics, thoughtfully linking people, offering advice and always having ideas. To experience any of this was to feel included, to feel validated and part of something.

When the council eventually fully endorsed support for artists and makers, Godfrey was on the first steering committee. He was delighted when we became the first region in the country to have a Craft Development officer in 1994, and, as we are all now aware, this changed everything for us in the region. When an Arts Development Officer followed (Jane McArthur), the council fully backed her plans for the start of Spring Fling, and unsurprisingly Godfrey’s studio was one of the first Spring Fling venues.

He was one of the founder members of Southwest Community Woodlands Trust (SWCWT), a driving force for change to the Land Reform Act, and passionate about craft apprenticeship schemes for young people. With others, Godfrey ran the Afghan Schools project, helping to set up schools and colleges in Afghanistan and risked his life many times by personally taking money to Afghanistan to pay the teachers.

There was always an open door at his workshop and he was a dear friend to many adults and children all over the world who will miss him greatly. He carefully made shoes for people who thought they would never find comfort, and a file of testimonials shows how much they appreciated his care and attention. Godfrey always had a kind word, a warm generous heart, a cheerful smile and a wonderful hug. We thank Godfrey for all his work, creativity and dedication, especially the inspiration he has imparted to many young people in this region. We know that his innovative ideas about apprenticeship schemes for young makers are being considered and will create a lasting legacy.

Ed Iglehart, one of his oldest friends in the region, wrote on the Taliesin website “There has hardly been a community-oriented good thing in which Godfrey hasn't been involved - usually at the heart of it”. Our thoughts are with his family: Sheila, Pete, Sandy and Vondy.
Godfrey’s funeral will be at Roucan Loch, Dumfries on Tues 20th Jan 4pm and afterwards at Balmaclellan Village Hall.