The Effect on Tour - Langholm and Castle Douglas dates

From Heart of Hawick


Rehearsals are now underway at Tower Mill, Hawick, for Firebrand Theatre Company’s Scottish premiere of The Effect, by Lucy Prebble one of today’s most celebrated playwrights. The first performance of the tour opens at Heart of Hawick with a preview on Thursday 19 February and runs until Saturday 21 February  followed by performances in Glasgow, Edinburgh, Perthshire, Dumfries and Galloway and the Scottish Borders.

The Effect, is an unconventional and moving love story; sexy, funny, and thought-provoking in the exploration of the limits of medicine in today's pill-popping culture and spiced with warmth, humour and intelligence. 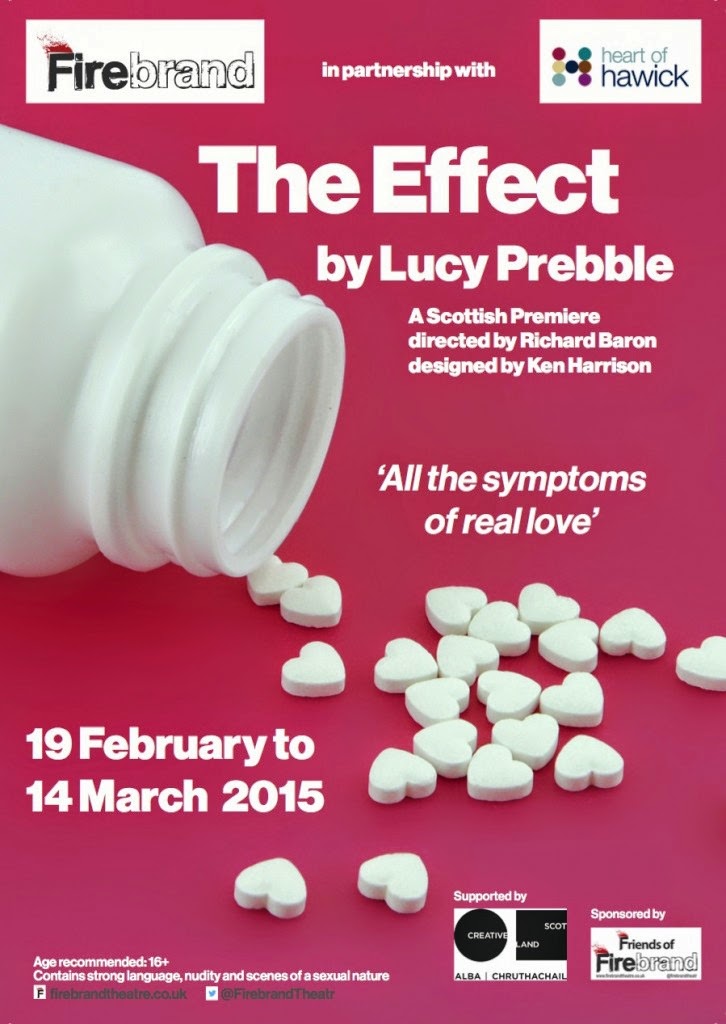 Director Richard Baron says: "Inspired by the consequences of a drugs trial at a private research unit at Northwick Park Hospital in which six volunteers suffered multiple organ failure, this is a highly topical and unusual love story in that it looks provocatively, movingly and humorously at the taboo subject of mental health and poses serious questions about the effectiveness and morality of the hugely successful anti-depressant drug industry. It asks what is a "normal" mind, do depressed people have a more accurate view of the world and is love itself merely a chemical reaction?

It's a very inventive piece that demands brave acting performances. We are therefore delighted to introduce Firebrand audiences to talented new faces Cameron Crighton and Scarlett Mack as the young drug trialists and experienced actors Pauline Knowles (A Slow Air) and Jonathan Coote (fresh from his West End appearance in The Audience starring Helen Mirren) as the supervising doctors, passionately opposed in their understanding of the science of depression and the value of medical intervention. Hopefully The Effect will stir the mind and move the heart."

Connie (Scarlett Mack) is a psychology student. Tristan (Cameron Crighton) is a charming drifter. Both have signed up to a clinical trial for a new antidepressant super-drug and sealed off from the outside world, the attraction between them turns into deeper feelings as their doses get stronger. They've been warned of side effects - can they trust their feelings, or is this just a chemical romance?

As the trial's overseeing physician (Pauline Knowles) and her superior (Jonathan Coote) contend with the illicit relationship of their charges, they become increasingly conflicted about the ethical implications of their work. It's soon clear they have a past beyond the laboratory and neither is objective about the complex issues that surround them.
Directed by award winning Richard Baron, The Effect features a stellar cast with set design by Ken Harrison, who received rave reviews for his design for The Ladykillers at Pitlochry Festival Theatre; lighting design by Matt Eagland and soundscape by Jon Beales all of whom have worked on previous Firebrand productions.

The original production opened to great acclaim at the National Theatre in 2012 and won the Critic's Circle Award for Best New Play for brilliant young playwright Lucy Prebble, author of the West End hit Enron and TV's Secret Diary of a Call Girl.

The Effect is supported by Creative Scotland and presented in partnership with Heart of Hawick  and sponsored by Friends of Firebrand.