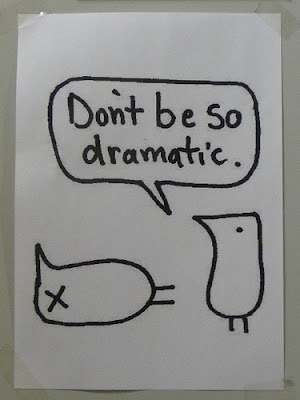 Waverley Gate, a play by David Greig
© David Greig 2012. First performed by the author at an open space event where the arts sector met to discuss national arts body Creative Scotland... coordinated by Roanne Dodds on 31 October at the Tramway, Glasgow
Scene 1
A consultation excercise ...
We are concerned about the lack of a drama strategy.
– That isn't a problem –
Well, we think it is a problem.
– It's not a problem, you just don't understand what we're doing.
We think we do understand.
– It's very complicated.
Yes, but
– Shhh...
What? –
– Shut up.
Did you just say shut up?
– Look, we don't need to talk about this in public, why don't you come in to Waverley Gate and we'll talk it over in private?
Scene 2
In private
– In you come, here's a coffee, ... so – what's the problem?
Well, the problem is we're concerned about the lack of a drama strategy and also, you told us to shut up.
– No we didn't.
Yes, you did.
– It's not a problem.
But we think it is.
– You just don't understand what we're doing.
On drama strategy? Or on shutting us up?
– It's complicated. Its too complicated for you.
But –
– Shhhh!
Really?
– Shut up.
Are you shutting us up –
– SHHH!
Scene 3
A demonstration
400 people stand outside Waverley Gate with placards, banners, loudspeakers etc.
All: 'THERE REALLY IS A PROBLEM.'
Pause
A voice, from deep within.
– 'WE AGREE.'
All relax, sighs of relief, etc. 'Phew.' 'They finally get it.' 'Thank goodness!' etc...
– 'THE PROBLEM IS YOU WON'T SHUT UP.'
Finis.